:Select A City To Begin:

Millions of families flock to the theme park capital of the world each year to experience the action-packed thrills and top-notch entertainment at Walt Disney World's Magic Kingdom, which first opened back in 1971. All in all, Disney boats 4 popular theme parks, 2 water parks and a shopping/entertainment district called Downtown Disney. The house of mouse's biggest competitor is the Universal Orlando resort, which has become well-known for being the home to the Wizarding World of Harry Potter. Universal house 2 theme parks, a water park and the CityWalk entertainment district. Children will especially enjoy a trip to the SeaWorld eco-adventure park, which is home to an abundance of penguins, dolphins, sea lions and a famous whale named Shamu. They also have 2 more laid-back water parks called Aquatica and Discovery Cove. The areas newest park is called LEGOLAND Florida and it's geared towards younger kids who adore everything LEGO. The area is surrounded by an abundance of world-class restaurants, countless hotels, premier shopping venues and a variety of smaller attractions, such as Gatorland. The ever-changing Big Apple is the largest city in America, offering stunning view of the city skyline from atop the 102-story observation deck of the Empire State Building. Visit some of the world's best museums, like MoMA, which is home to Pollocks, Warhols and most notably, Van Gogh's Starry Night. Or consider visiting the Met, America's largest and most-visited art museum. Be sure to take step into Broadway to see one of the nation's most talked about performances. Battle the crowds in Times Square, the world's most-visited attraction, or stroll through Central Park to escape the concrete jungles of Manhattan and possibly go ice skating or visit their famous zoo. Don't forget to do a little bit of window-shopping at places like Bergdorf Goodman or Saks Fifth Avenue and of course the kids will appreciate a visit to the giant piano at FAO Schwarz or the indoor ferris wheel at the super-sized Toys"R"Us in Times Square. Experience culinary delights from Chinatown, Little Italy or get a slice of NY style pizza at America's first pizzeria, Lombardi's. What's a trip to The Big Apple without a stroll through Times Square?

This iconic, trend-setting destination offers giant parks, haute to down-home cuisine, record-breaking architecture, a glance at the famous Cloud Gate sculpture, fantastic shopping on the Magnificent Mile and a vibrant nightlife. See American Gothic at the Art Institute, take the kids to the free Lincoln Park Zoo, and admire the 2 tallest buildings in America, which include the world famous, 108-story Willis Tower and the 98-story Trump International Hotel and Tower, which opened in 2009. Be sure to get a bird's eye view of the city from atop the Willis Tower, at Skydeck Chicago, or at the nearby John Hancock Observatory. Baseball fans will want to cheer on the Cubs or go on a behind-the-scenes tour at Wrigley Field. Other popular attractions include Navy Pier, Shedd Aquarium, The Field Museum, Adler Planetarium and the Museum of Science and Industry. Experience the finest of fine dining, along with a slice of authentic Chicago-style deep-dish pizza. 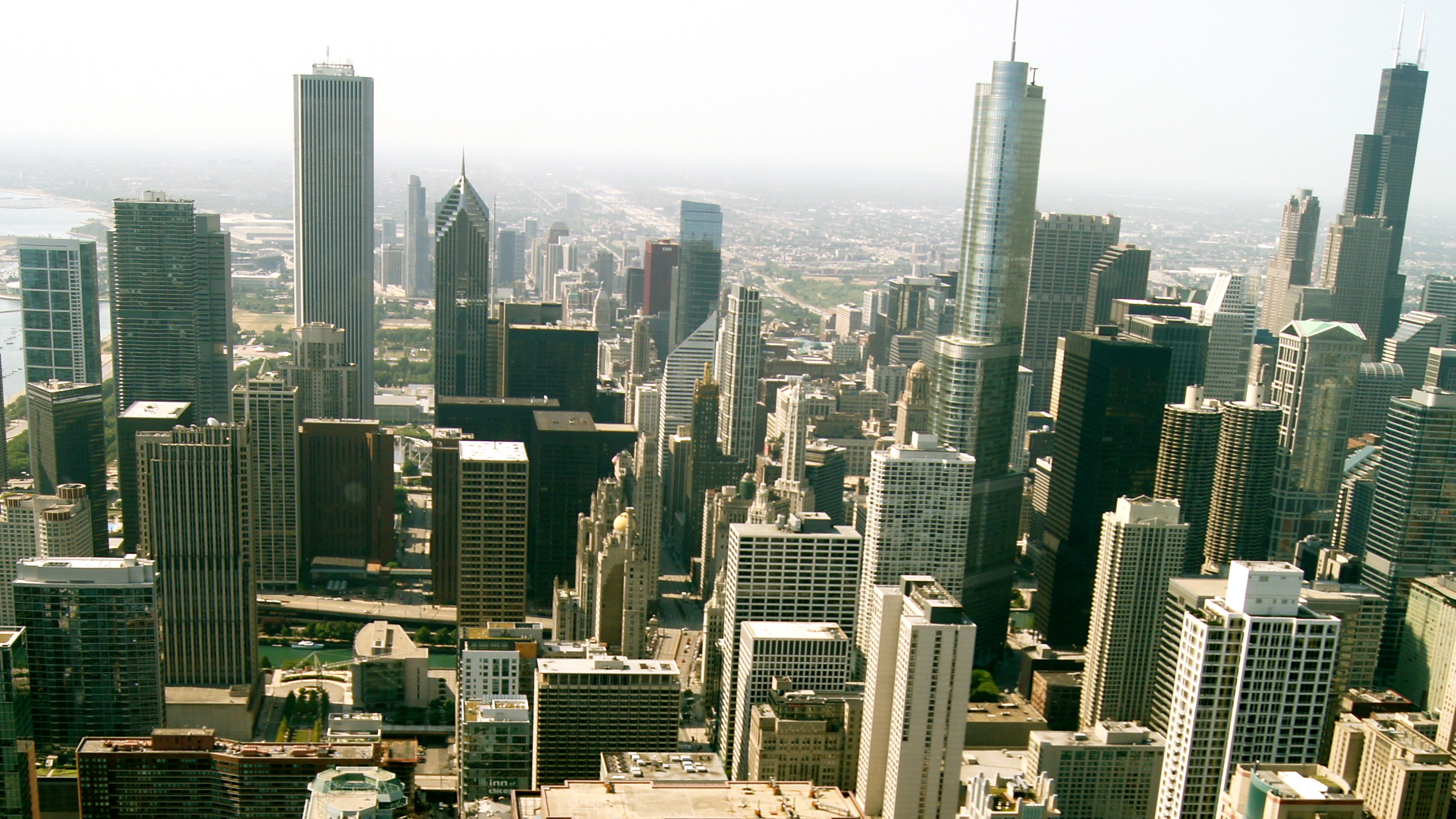 Chicago is the third largest city in America.

There's no wonder why the world's biggest movie stars choose to reside in America's quintessential vacation destination. With warm weather and endless fun at the Santa Monica Pier or Malibu's Surfrider Beach, to paying homage to your favorite celebrity on the Hollywood Walk of Fame at Grauman's Chinese Theater, LA has something for everyone from from the biggest of celebrities to commoners, like myself. Go shopping on Rodeo Drive or visit the Grammy Museum, Madame Tussauds, the Hollywood Museum and take a hike to get close to the iconic Hollywood Sign. See your favorite TV show taped live, putting you right in front of the stars of your favorite show for free. Hollywood is the happening place for wild nightlife, but also has more reserved dining establishments, many of which are owned by a celebrity chef. The children will especially enjoy taking a short trip out of LA to the many nearby theme parks, water parks, aquariums and zoos in SoCal. Southern Florida is home to the best beaches to get toned and tanned for a night out on the town at South Beach. Experience the Cuban culture, people-watch on the beach, discover the Art Deco stylings of the Venetian Pool or discover the beauty of Vizcaya Museum & Gardens. Meet Lolita the killer whale, dolphins, sea lions and over 100 other species of sea life at the Miami Seaquarium or head to the 740-acre Miami MetroZoo, with 1,200 animals including Lowland gorillas, orangutans, African elephants, meerkats, tigers and koalas. Go shopping at one of their trendy boutiques or choose from 300 stores at Aventura Mall, the 3rd largest shopping mall in America. Miami visitors also have the alligators of the Everglades right at their finger tips and the Florida Keys just a short drive away.

Sin City is the only place where you can get your picture taken in front of the Eiffel Tower, the Statue of Liberty and a behemoth-sized, life-like pyramid all in the same day. This glitzy piece of heaven is perhaps best known for it's lavish, over-the-top themed hotels, many of which feature their own signature attractions, an endless amount of buffets, loads of slots, high-end nightclubs, gourmet restaurants, first-class shopping, broadway-style shows and much more. In fact, there's a few, such as Mandalay Bay, that even have there very own wave pool and mini water park! Or visit the real thing at the new Wet'n'Wild water park! Be sure to see a complimentary performance from the world renowned Fountains of Bellagio, discover a tropical dolphin habitat and see lava-spewing live at the Mirage Volcano, go on an indoor gondola ride through the Venetian and see a Cirque du Soleil show or see a big headliner like Britney Spears, Garth Brooks or C�line Dion. Be sure to also check out the state-of-the-art, $11 billion CityCenter shopping/dining/entertainment/hotel complex, which opened in 2009. See The Fountains of Bellagio!

This cosmopolitan metropolis offers a diverse selection of attractions to satisfy everyone in your party. See whale sharks, dolphins, beluga whales, and so much more at the largest aquarium in the world, The Georgia Aquarium. Outside of the central city you will find one of a kind Stone Mountain and don't miss the pandas at the ever popular Zoo Atlanta. See paintings by all of the greatest masters at the High Museum. Go on a behind-the-scenes tour of the CNN headquarters to record your own newscast and see how the inventors of the 24-hour news cycle have grown to where they are today. See Reverend King's tomb stone, church and boyhood home at the Martin Luther King Jr. National Historic Site. Those coming between April through September will want to get a tour, see the museum and consider watching the Atlanta Braves play baseball at Turner Field. The largest city in Texas and the fourth largest city in the USA, Houston is home to world class museums, a diverse selection of parks and some incredible barbecue joints. Space Center Houston is among the lone-star state's leading attractions, it's where all the planning and training for leading missions takes place; featuring lunar simulators, anti-gravity environments and actual moon rocks that they allow you to touch. The Houston Museum of Natural Science features incredible a recreated rainforest, dinosaurs, fossils, mineral exhibits, an IMAX, planetarium and even a butterfly conservatory. Also in the museum district is the Czech Center Museum, the Health Museum, and the Children's Museum of Houston. The Menil Collection features over 15,000 works of art, ranging from medieval to surreal. Schlitterbahn Galveston Island, has been voted to be the best water park in the country by the travel channel and it's located one hour outside of Houston. "Space City" is well worth a visit.. So what are you waiting for cowboy?

Once the capital of The United States, Philadelphia is especially rich in history and culture, as it is home to sites such as The Liberty Bell, which was commissioned in 1751 as America's symbol of freedom and independence, and Independence Hall, which are just a few of the many sites preserved within Independence National Historical Park. Thomas Jefferson and Benjamin Franklin once walked the cobbled streets of the "City of Brotherly Love." Be sure to try a classic Philly cheese steak, watch coins being made at the Philadelphia mint, Get chills down your spine as you visit the church where George Washington once worshipped, Christ Church and make a visit to Franklin Court, the site on which the home of Benjamin Franklin once stood. Pay a visit to The Philadelphia Museum of Art, America's third largest art museum, featuring over 227,000 objects including a large Bathers by Cezanne, a room devoted to Philadelphia's own Thomas Eakins and Marcel Duchamp's notorious mixed-media Bride Stripped Bare by her Bachelors. Visit the Edgar Allen Poe House to see where the famous poet once lived and wrote some of his most famous poems. From the World Series-winning Phillies to seeing where our country got it's start, Philadelphia is sure to delight.

A mild climate with beautiful year-round beaches, award-winning zoos, numerous museums and an ideal location near many theme parks such as SeaWorld and LEGOLAND, and being only a few hours away from LA and Disneyland all attracts over 30 million visitors each year. The best attraction in town is by far the San Diego Zoo, America's most-visited zoo, in Balboa Park, the largest urban cultural park in the nation, which is where 3 giant pandas can be seen. Also in this 1,100-acre park, you can discover well-maintained gardens, 15 museums, hiking trails and a variety of recreational activities. The Maritime Museum of San Diego offers a hands-on look at the city's days as a bustling seaport, allowing you to tour rare yachts and set sail across town. Expose the kids to the arts at The New Children's Museum and let them get creative in the Wet Studio or play on the graffiti-covered climbing wall. The downtown Gaslamp Quarter allows you to "step back in time" to a Victorian paradise where you can party the night away, "Cali" style. You can't visit San Diego without a stop at their world famous zoo.

Looking for inspiration or more information?

Check out my newest blog posts to get inspired and learn about the latest happenings. If you have a little time on your hands then you should consider taking a road trip. Take in the landscape, see small towns, and take part in an experience that you will never forget. If you are looking for a little more information then you should consider signing up for our critically acclaimed email list or snatching one of the books mentioned below. It never hurts to be in the know!